The Barcelona’s Zoo is located in the Ciudadela Park and is considered one of the best in Europe. Its history began thanks to the donation of the private collection of animals Lluis Marti i Codolar had in his farm called “The Old Farm” located in Horta. It was inaugurated in 1892, on the day of the patron saint of Barcelona, La Mercè. 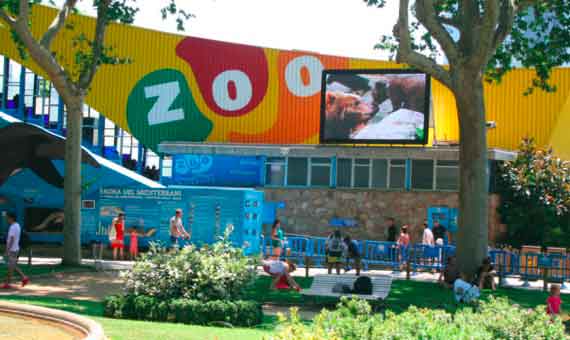 For years, specifically from 1966 to 2003 the star of the Zoo was the famous Copito de Nieve, the only known albino gorilla.

The Zoo is configurated for several different spaces:

The Farm: One of the facilities that most please the little ones, here you can see goats, cows, ponies, sheep, pigs, horses and donkeys.
Primates Gallery: so humanlike in some ways.
Palmeral: A pleasant walk, you will enjoy cockatoos, macaws and parrots.
Titis’ Gallery: You will be surprised to know the seven species of the smallest primates that exist, the South American titis.
Terrariums: Home to small dragons, arrow frogs, iguanas, large caimans and giant snakes.
Aquarama: A huge pond where dolphins have fun doing pirouettes.

Everyday from 10am to 7pm

You can buy your TICKETS HERE