Between the year 27 A.C. and 14 A.C. Augustus controlled the colony that had settled in Barcelona under the name Barcino. It was a city founded to distribute its land among retired Roman soldiers, a common practice in the ancient Roman culture. Given its location (at the foot of the Mediterranean), Barcino soon became a city with flourishing trade and economic development, driven by the farming activity, especially the wine lands. 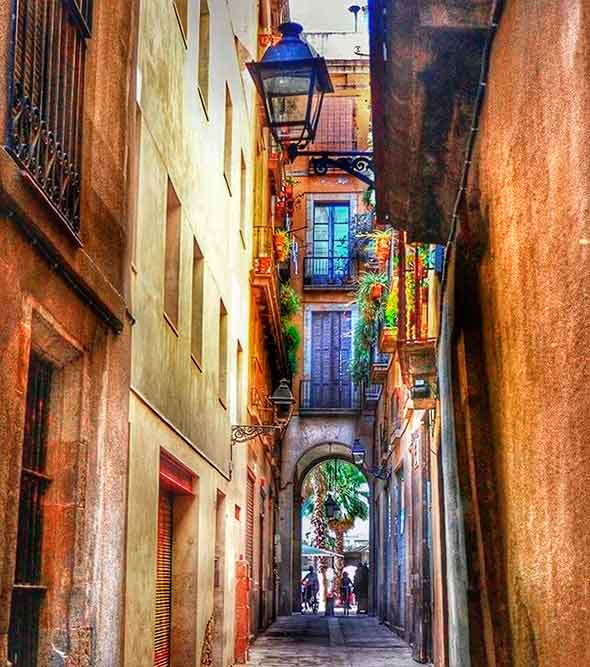 This neighborhood is the heart of Barcelona and is a vibrant mix of the roman medieval town “Barcino” and the palaces, churches and mansions of the Gothic era. A quarter where in one street you can see the splendor of a palace coexist with old medieval houses.

The Gothic Quarter (Ciutat Vella in Catalan) was born in the actual Sant Jaume Square, the place were today you can find the City Hall (“La Casa de la Ciutat“) and the Catalan Government (Palau de la Generalitat). This was the point were the 2 most important streets of medieval Barcino converged.

You still can see the remains of the Roman Temple of Augustus that was located in the heart of the Barcino city or the Roman walls or the old Roman Necrópolis, because the Roman and Medieval Barcino is still the heart of the actual city of Barcelona.

And exactly this is the charm of this neighborhood: you can see many centuries of history and architecture in just a few square kilometers. For instance the Cathedral and other Gothic churches like Santa Maria del Pi and Sant Just i Pastor. Or the old Jewish Quarter with its ancient synagogue. Or the Plaça Reial which used to be the royal residences of the Catalan-Aragonese monarchs. This big square is surrounded by narrow streets in a Barcelona neighborhood that is rich with history and which comes to life when you go there.

The Gothic Quarter is a part of the city where you never be boring and you would need thousands of days to discover all their stories, secrets and hiding places, because this old neighborhood is still full of all the magic and mystery of the past, along with all future prospects. Perhaps this has been chosen many times as a backdrop and even more: as a star of movies and films.