The city grew very quickly in this area called “El Born“, where was located many ship-building, imports-exports of all kinds and its workshops for artisans and craftsmen. The street names of the area still reflects these trades and businesses. 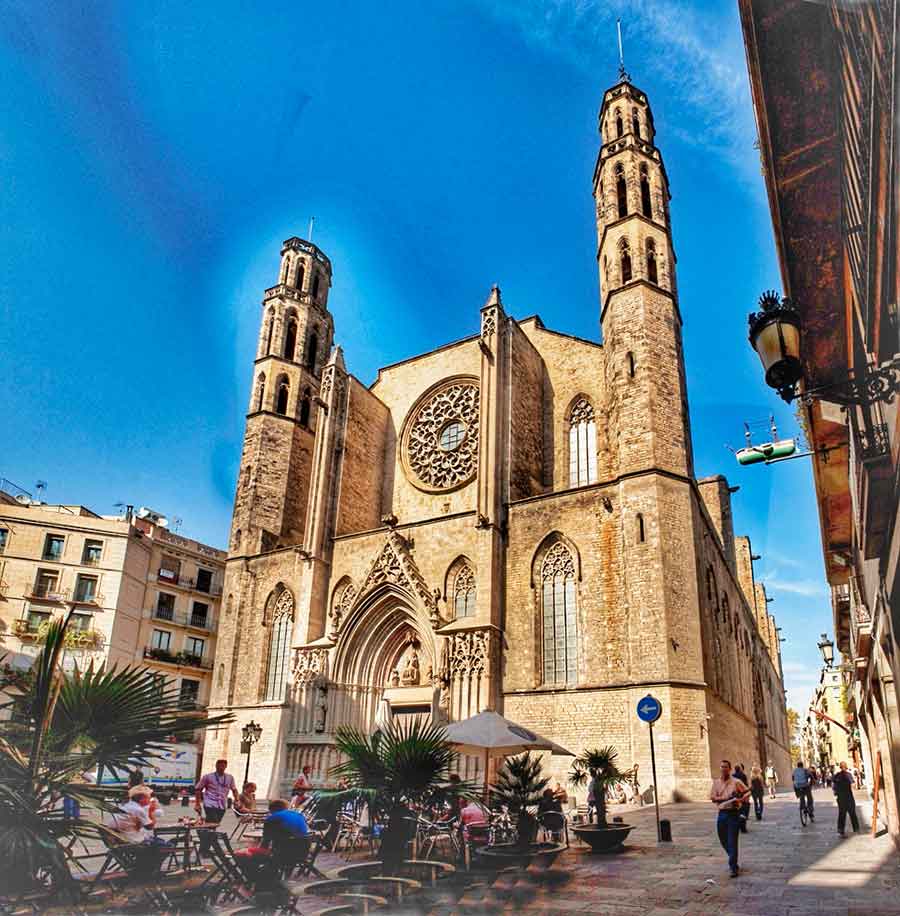 With all this bussines around the chapel, many merchants and minor nobility built their houses on Montcada Street. It was time to start to build the church that we can see today.

This is the most emblematic example of Catalan Gothic, with a predominance of horizontal lines, no wide openings in the wall sections, or decorations. The horizontality is present in all the building with mouldings, cornices and flat surfaces. To avoid excessive sense of height. As for the exterior, on the main façade, framed by two octogonal towers, so that also appear in the interior columns, appear the images of Sant Pedro and Sant Pablo, with a rosette fifteenth century Gothic style. The stones to its construction, come from the Montjuïc mountain and there were bring by boat or shoulder.

We must also mention the gargoyles that appear on the buttresses on the facade of Santa María del Mar, besides the reverses of the satined glass Windows.

From inside highlights its amplitude of forms and lack of decorative elements. It has three naves separated with tall columns. The lateral naves mesure exactly half the central and the total width of the ensemble is equal to the height of the lateral naves, showing its harmony.

A perfect way to know how it was built is reading the novel by Ildefons Falcones: La Catedral del Mar.

Do you want to know some curiosities about it? During the rebellion of 1936, this church suffered the same fate as many others in Barcelona: it was completely burned down. Hence, today it seems an austere church. There is in one of its windows the FCB (Fútbol Club Barcelona) shield. Do you dare to discover in which of them?

You can buy your TICKETS HERE to visit the terrace and the towers.