The iconic street that goes through the old town of Barcelona from Plaza Catalunya to the old city port is called “La Rambla” and is about 1 kilometer long. The name comes from the Arabic ‘Ramla’ which means sand. Until 1854 it was merely a dried stream that turned into a broad gauge of sand. The trees alongside the street were bought from Gerona during the Napoleonic occupation. Only at the end of the year 1700, the sandy stream was urbanized and took -more or less- its present form. 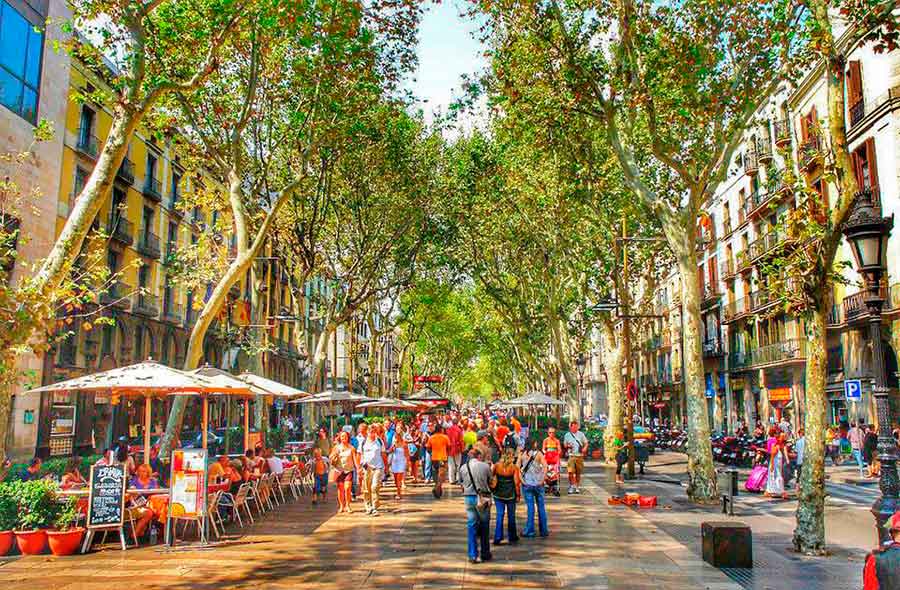 When Barcelona extended its walls with a second circle around the initial Roman walls, the Ramblas was left inside this second wall. With that it became a safe and secure place where many convents were established. Examples are the Convent of the Order of the Discalced Augustinians (which now is the Santa Mònica Art Centre), the Convent of the Capuchins Santa Madrona (now the Plaza Reial), the Convent Sant Josep (now the Boquería Market) and the Carme Covent. Perhaps for this Las Ramblas was known as “the Convents street”. Voices say that the convents did not choose La Rambla for its security but more to be near the prostitution area.

This walk way is crowded 24 hours a day seven days a week. You’ll find on the Rambla the famous human statues, newspaper stands and souvenir shops, flower stalls, artists and painters. During the nightly hours the atmosphere is different but still just as charming.